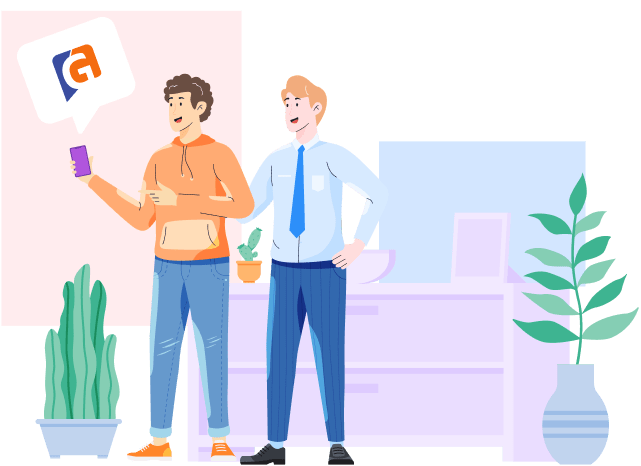 Employees on GaggleAMP account for approximately two-thirds of Contrast Security’s social media clicks and interactions while contributing to a nearly 13,000 increase in connections to their personal accounts. The company uses GaggleAMP to increase brand awareness and engagement on social media, garnering over 10,000 social interactions and more than 3,000 clicks in nine months.

VP of Corporate Marketing Tim Freestone joined Contrast Security in late 2019 and recruited Patrick Spencer to serve as the Head of Content Marketing and PR/Communications in early 2020. As part of the overhaul of the company’s social media strategy, the two of them wanted to increase employee social engagement. The objective was to extend the company’s social media reach and increase social engagement—clicks, likes, comments, and shares.

Four different social advocacy platforms were evaluated, and GaggleAMP was chosen for its ease of use and competitive pricing. Spencer had previously deployed GaggleAMP at a prior organization and understood the solutions’ capabilities.

Spencer chartered Esther Aladieff, who is the company’s Senior Digital Content Manager, and a former intern, Jane Mezzino, to oversee the implementation of the new social media strategy, including the rollout of a new employee advocacy platform. “Due to outstanding program management skills, the ease of use and deployment of GaggleAMP, and great support from our GaggleAMP customer success manager, they had the solution configured and live in a matter of a day,” Spencer observes.

For branding, the Contrast Security team named their deployment of GaggleAMP Contrast Social AMP. Training sessions and email and Slack promotions were pushed out to Contrast Security employees as part of the onboarding and rollout of GaggleAMP in July 2019. Aladieff established different metrics for the program that she tracks and reports monthly to management.

To ensure a successful program kickoff, the Contrast Security team added prizes for employees who engaged with the most LinkedIn posts—liking, commenting, and posting them on their own LinkedIn accounts. In its first full month with GaggleAMP, employees on Contrast Social AMP shared over 100 LinkedIn posts. This represented about half of the total clicks and social interactions Contrast Security had that month.

Contrast Security publishes between four and six new social posts each business day across four different social media channels. “We have a high-volume, content-rich content marketing program that generates new content assets almost every day,” Spencer says. “Ensuring these get wide dissemination and engagement is important, a reality that has been accentuated by the COVID-19 pandemic. We publish social posts on every new content asset, media reference, and event. GaggleAMP enables us to amplify our reach. It is an important tool in our promotional toolbox.”

In addition to marketing content and events, the Contrast People team sees great value in GaggleAMP. “We publish nearly every new job posting on GaggleAMP and highlight content and events that help in recruitment efforts,” Aladieff explains. “Indeed, our job postings are some of the most popular shares and likes by employees.”

One of the aspects that Spencer and Aladieff like about GaggleAMP is the fact that social shares from employees often garner greater trust than if the post came directly from the company.

Over the first nine months of its deployment, GaggleAMP has accounted for around two-thirds of the company’s total LinkedIn engagement, with the remainder generated through direct engagement with the company’s LinkedIn account. Around 50 employees are involved in Contrast Social AMP. Engagement has remained steady since deployment, with employees generating an average of 800 to 1,000 social interactions through likes, shares, and comments that result in upwards of 300 clicks each month. Reposts from employees in the program generated over 10,000 social interactions that resulted in over 3,000 clicks. Employee engagement on Contrast Social AMP also helped contribute to a nearly 13,000 increase in LinkedIn connections for Contrast Security employees.

Spencer and Aladieff both concur that Chad Rosh, their GaggleAMP customer success manager, has played an important role in helping to ensure ContrastSocial AMP’s success. “The onboarding templates laid the groundwork for a fast start,” Spencer notes. “Jane, our marketing intern, had limited time due to school to oversee the configuration and deployment. But with Chad’s guidance and the tools he put at her disposal, she was able to launch the program quickly and easily. And when Esther moved over to assume full responsibility for the program when Jane graduated, Chad ensured a seamless transition.”

A critical linchpin in Contrast Social AMP since its launch has been gamification. “Contrast has a unique culture,” Aladieff comments. “We work hard but like to have fun at the same time.” Since the launch of the employee advocacy program last summer, the Contrast Security team has designed and held monthly competitions.

“From the very start, we have offered monthly winners the option of Amazon Gift Cards or a donation on their behalf by the company to one of six different charities,” Aladieff says. “We worked with our People team to identify the charities and then with the Finance team to design a process for either paying out the reward in the form of the gift card or to the charity selected by the award winner. Employees like having the option.” Charity options include Feeding America, Habitat for Humanity, The Bill and Melinda Gates Foundation, Khan Academy, The Trevor Project, and Black Girls Code.

The competitions vary from month to month. “For some months, we have simply rewarded the top three leaders on the leaderboard,” Aladieff relates. “In other months, we have awarded top winners from different departments. Most recently, we conducted a drawing and entered everyone who achieved a specified number of points. Mixing up the monthly rewards helps keep our members engaged.”

One capability in GaggleAMP that Aladieff finds useful is the assignment of points for different activities. “Not all social activities are the same,” she says. “There are certain content or event posts that are more important.” Spencer elaborates, “As an example, we just announced a major research report from our Contrast Labs team that involved hundreds of staff hours to research and compile. The report itself as well as all of the derivative assets and execution activities such as the webinar, blog post, press release, podcast, and so forth all warranted higher points.”

Employee Advocacy Is a Requisite

Employee advocacy is a requisite part of any social media strategy, according to Spencer.

If you’d like to learn more about GaggleAMP, watch the demo video below.