Bots are a growing problem across almost all digital platforms, including Twitter, and many of these platforms are making an effort to mitigate them.

A Twitter bot is an account on Twitter that runs autonomously, performing actions a person would typically carry out. Through Twitter’s API, these software-controlled accounts can retweet or favorite tweets, follow or unfollow accounts, direct message other users, and post tweets on their own.

Too many bots can dilute the quality of a platform because users won’t trust if other accounts are actual people. They can also make it difficult to run online surveys or accurately measure the performance of content posted on a platform due to bots altering click counts, votes in online polls, or other metrics you’re measuring.

There are some Twitter bots that serve a positive purpose, such as sharing updates on the local weather, but there are others that Twitter wants to get rid of for good reason.

Over the course of the last few months, we’ve noticed that Twitter is making an effort to identify and suspend any account it suspects of being a bot. Once an account is suspended, the owner of the account simply has to reauthorize their credentials within 14 days to prove they are a person. 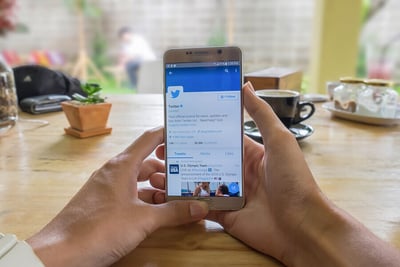 What Do Twitter Bots Have To Do With Me?

Clearly, you’re a person, so you might think there’s no way anyone will mistake you for a Twitter bot.

Depending on your activity on the platform, you could be mistaken for a Twitter bot, resulting in the suspension of your account.

There are ways you can perform actions on Twitter that will make people skeptical of your account. For example, if all your tweets are exactly the same as other people’s tweets, and all these similar tweets post around the same time, that will look suspicious.

If you use an employee advocacy tool that allows users to automate activities they want to carry out, you need to be aware of Twitter cracking down on Twitter bots.

Over the last three months, we’ve seen Twitter suspend a small number of Gaggle Members because they were suspected of being Twitter bots. The vast majority of these accounts had auto-share turned on and did not perform any actions on Twitter outside of those performed by the auto-share functionality.

This problem occurred across an extremely small number of users, but it’s important to be aware that you can easily prevent this from happening to you.

What Can I Do To Prevent Being Identified as a Twitter Bot?

If you use Twitter on your own and your actions on the platform are not just automated actions, then you will not be suspected of being a Twitter bot.

Sounds simple right? Well, it is!

Additionally, to avoid being identified as a Twitter bot, we recommend that you don’t use the auto-share functionality.

If you use auto-share, that’s completely fine, but users should perform other actions and activities outside of ones that are automated. Auto-share users who do not actively use Twitter are very likely to be suspended by the social media platform.

In the event your account is suspected of being a Twitter bot and is suspended, all you have to do is reauthorize your account within 14 days. As you can see from Twitter, they request you log in to your account to keep it active. Of course, Twitter is simply trying to clean up what it considers to be inactive users, but that can cause alarm to those using third-party services like GaggleAMP.

In short, this is a small issue that you should be aware of but not overly concerned about. There are easy steps you can take to avoid this ever being a problem, and if you do run into this problem, we’re here to help you get through it quickly.

If you have any questions, feel free to reach out to our Customer Success team.

You should also keep in mind that if this problem is even mildly concerning to you, then you might want to rethink your social media advocacy strategy.

If your Twitter activity is completely automated, that brings up many problems.

Not only will Twitter think you’re a Twitter bot, but other people will think you are as well. That takes down your engagement and the likelihood that other people connect with you, and will greatly impede your social media reach.

Again, if you want to automate some of your activities, that’s totally fine, but you should actually use your Twitter account, be active, and engage with others to make the most of the platform. This goes for all social media platforms, not just Twitter.

You want to be active on social media, be engaging, and be authentic. If you share content that’s suggested to you through your employee advocacy program, that’s great. Edit the suggested captions so they sound more like you rather than the person who suggested it to you.

You also want to comment on other people’s tweets and posts. Engage with people on your own instead of only carrying out actions your marketing team suggests. If you do this, you can draw people’s attention, build new connections, and extend your social media reach by building your presence.

The whole idea of employee advocacy is to have authentic and trustworthy messaging. People trust other people more than they trust brands or ads. Because of this, people are more likely to engage with a message an employee posts than that same message from your brand account.

If you use social media and act like a bot, no one will think you’re a person. You need to present yourself authentically. Don’t be an automated account. Be a real person, and people will engage with you as such.

Your employee advocacy program will arm you with suggested actions to carry out to grow your social media presence, but that shouldn’t be the extent of your social media activity. It should make up less than half of your activity.

If you’re active on social media on your own, not only will be mistaken for a Twitter bot be the least of your worries, but your social media presence will rocket way up.