Why Influencer Marketing is Tough To Trust

Influencer marketing is one of the most widely practiced social media marketing methods today. We’ve all seen celebrities and influencers on social media pushing products, but we’ve also developed a radar that tells us we might be looking at a paid promotion.

As widespread as influencer marketing is, it definitely has its flaws. So is it a method that your organization should practice? As a consumer, does it even work on you anymore? There’s a better way to go about it. The reason brands use influencers to push their products is because of trust. People don’t completely trust when a brand talks up their own product. Additionally, People have become much more numb to advertisements, whether they’re on TV, radio, websites or social media. To overcome this problem, companies pay social media influencers to promote their products to their mass of followers.

Influencers can be celebrities, athletes or people who’ve accrued a huge amount of followers over time. This tactic of hiring influencers to promote products is so widespread that it’s become an industry of its own. The global spend on influencer marketing could be as high as $10 billion by 2020, according to a study by Mediakix.

On top of that, influencers are supposed to clearly disclose when a social media post or story is a paid ad or promotion, according to the FTC, but they usually aren’t doing this. Mediakix found that 93% of endorsement posts by top social media influencers aren’t properly disclosed by them, which violates FTC guidelines.

This is the problem with influencer marketing and the reason it became so widespread. It's a way for vendors to discreetly push an advertisement in front of you that features someone you like. It’s also an easy way for people with a huge number of followers on social media to make a lot of money. Some influencers charge as much as $100,000 per post, according to Vox.

So what are you really looking at? It’s an ad from someone you like who isn’t properly disclosing that they’re posting an ad. But so many people do this now that you can sense when its inauthentic. When you see an athlete in their Instagram story talk extensively about an energy drink they like, your antenna goes up. There are so many examples to point to, and that’s why it’s become a problem.

Because you can tell when an influencer’s post is something they were paid to do, you treat it the same as you would an advertisement.

People don’t trust brands or advertisements as much as they trust other people. The consumers' trust of influencers is why vendors got into influencer marketing in the first place. Sure, it might look great to have a celebrity endorsing your product, but if people can tell it's just an ad, then you’re not getting what you wanted initially.

So what can you do instead?

Instead of paying an influencer thousands of dollars to post one message that people will know is an ad, have your coworkers use their social media accounts to voluntarily promote your brand’s initiative. That’ll be less expensive, look much more authentic and people will trust it.

Influencer marketing requires one person to post one message to a massive amount of followers for a lot of money, but you could just have your employees, who genuinely want your brand to succeed, to continuously share and promote posts voluntarily in order for you to see success on social media. Supporting Anxious Employees in the Workplace in 2023

5 Way Influencer Marketing Can Help You in a PR Crisis 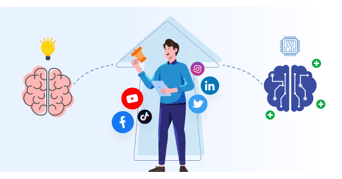 Intelligent Social Media: Why Creativity Can't Be Siloed In Marketing