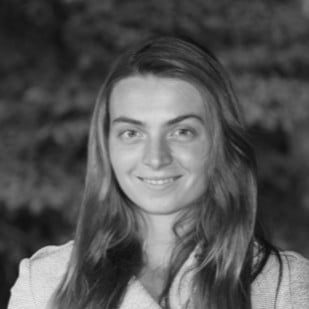 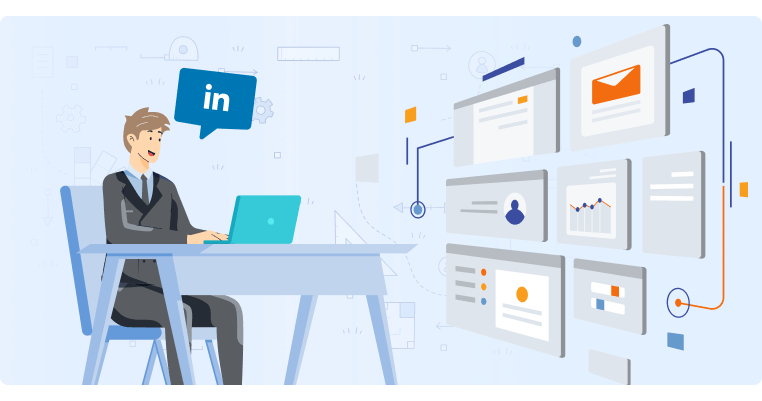 All of that is important.

However, despite following these best practices, plenty of brands still find their content generates subpar engagement.

The typical response is, "well, you just have to keep posting consistently, and eventually, your engagement will improve."

However, that doesn't seem to be true.

To explore this hypothesis, we studied 30 companies from the Fortune 1000 list. The average company posted 3.8 times per week, and the average post only generated 1.7 comments and 4.8 shares.

However, some brands have a modest LinkedIn audience and consistently generate excellent engagement.

For example, Tata Technologies is an engineering company, and the engagement on this post is good – but not abnormal – for their brand: 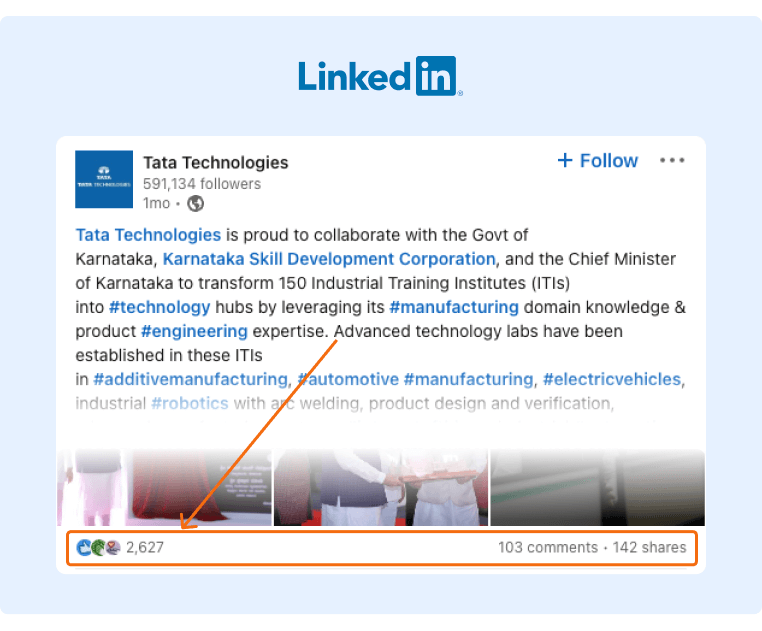 So in this post, we'll break down specific LinkedIn posts from top-performing brands and uncover exactly what they're doing differently from everyone else.

(Hint: It doesn't involve posting content five times a day or waiting ten years for your follower count to grow.)

While I mentioned above that just optimizing your strategy probably won't unlock explosive growth, it is still important to have a solid foundation that you can build on. Specifically, be sure to:

Let's briefly discuss each of these points.

You already know the basics of filling out your LinkedIn profile, like adding high-quality images, so here are a few pro tips to improve your LinkedIn page.

First, add relevant keywords to your summary and overview to make it SEO friendly. This will help relevant LinkedIn users find it and boost your visibility in traditional search engines like Google.

In addition, if your brand offers a SaaS or eCommerce product, you can add products (along with a product video) to help people quickly understand your offer.

LinkedIn also enables you to add a custom CTA to your company page. So now you can drive people directly to a demo signup page or send them to an informational page to learn more. 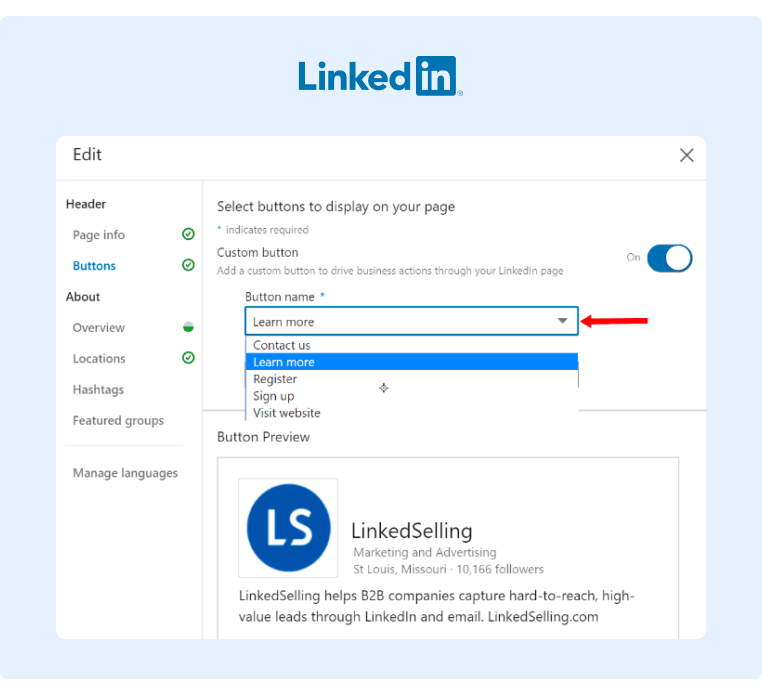 In addition, ask your employees (especially your executives) to update their profiles as most people looking at your company will probably also view some of the employees' profiles.

Rather than staring at a blank page and trying to think of compelling LinkedIn post ideas, here are a few common themes we've seen across the top-performing content:

In the examples below, you'll see all three of these frameworks at play, so keep reading for more examples!

Finally, you've probably noticed that the LinkedIn algorithm gives posts with good initial traction more organic reach. So if LinkedIn shows your post to a handful of people and they scroll past it, the algorithm will probably give it less organic reach.

Fortunately, you can also use this to your advantage.

If a handful of your employees engage with a post when it's first published, the LinkedIn algorithm will take that as a positive signal and give it more reach.

In addition, you'll get more organic reach when your employees re-share the content with their social networks.

So as you'll notice throughout the examples below, all of them used employee advocacy to gain some initial traction before the posts took off on their own.

If you want to incorporate employee advocacy into your marketing strategy, consider using GaggleAMP.

GaggleAMP is an employee advocacy platform that makes it easy for managers to assign relevant content to the right employees in minutes. Employees then receive a notification and can complete all of the engagement assignments directly inside the platform (and schedule them to go live throughout the week).

If you want to see how it works, you can either schedule a demo or try it free today.

Now that you have a solid understanding of the basics, here are some of the best LinkedIn post examples we could find.

In this post, CPaaS company Vonage announced an award they won. So while the content itself wasn't incredibly creative, it was well optimized and the strategy they used to promote it was effective enough to make it a huge success.

Analyzing it from an optimization standpoint, they used a custom short link (which is a recommended LinkedIn best practice). They also created an appealing, visual graphic rather than using the featured image from the press release.

To promote the post, they used GaggleAMP to deploy an employee advocacy strategy (asking their employees to engage with it).

The CEO himself engaged in the comments, and his comment alone received 39 likes.

Pro Tip: If you're struggling to get executives to engage with your content, GaggleAMP makes it possible for you to pre-write text for them directly inside the activity assignment.

Elastic is a platform for search-powered solutions, and one of its most successful social media posts is a feature release announcement.

Rather than just linking to a blog post, they created a quick video summarizing the new feature. If you want to create a similar video, you could hire someone on a platform like Upwork.

In addition, they included a shortened URL to the full blog post (rather than using the full URL).

To drive more engagement, Elastic deployed an employee advocacy strategy (using GaggleAMP) and requested employees to engage with the post.

This gave it the initial traction necessary to get the word out and then you can see that it naturally generated plenty of engagement from customers and potential customers:

Stryker is a medical equipment manufacturer, and one of its most successful social media posts was an interview with an employee. LinkedIn is first and foremost a social media platform, so showcasing one of its employees adds a humanistic element to the post, making it much more shareable.

In addition, Stryker chose to create a video rather than just a text-based post, which is often more engaging. The video also uses a branded frame and has subtitles to encourage viewers to pause. If you want to add a similar frame to your videos, you can use a tool like Animoto.

It also includes three hashtags (two of which are keywords, and one is a branded term), and the URL is also shortened.

As you can see, the post is well optimized and follows classic social media best practice advice, though what really pushed it to be successful is that they used employee advocacy to promote it. Once employees started sharing it, the post picked up plenty of organic traction, and the engagement snowballed.

Archer is a San Francisco-based aerospace company building all-electric vertical takeoff and landing aircraft. So when they achieved their first hover flight test, it was a perfect opportunity for a LinkedIn post.

For this post, they created a high-quality, professional video that included clips of interviews with the founders, footage of the preparation, and the actual test flight.

So it's no surprise that the post was a huge success. To further promote the post, they also leveraged employee advocacy. As employees pushed the post to their network, it quickly picked up traction and attracted the attention of highly influential figures, including other C-suite executives and industry leaders.

TripActions is an all-in-one travel, corporate card, and expense solution that recently released a Well-Being dashboard. To promote the new feature, they created a screen video of the feature in action and added a compelling post (with statistics) to explain the pain point the new feature solves.

It also includes five relevant hashtags and the link to the blog post is a shortened URL.

To help it achieve maximum reach, they also used employee advocacy to promote the post to the employee's followers.

Amadeus is a travel company that recently announced a partnership with Goodwatt, a business supply company. The partnership enables Amadeus's employees to ride electric bikes to work, so it shows off some of its employee benefits and shows that it's an environmentally conscious company.

Culture-focused and sustainability posts tend to perform, so by combining both themes into one post, the content was well positioned for success.

As you can see from the comments, it clearly struck a chord with the audience.

In addition, they added several photos of their employees using the bikes, which adds a humanistic element to the post.

Finally, they also used employee advocacy to boost the post's reach, and because the content itself was already well-liked, it didn't take much for the post to pick up traction. As you can see from the comments, most of the engagement was from non-employees. 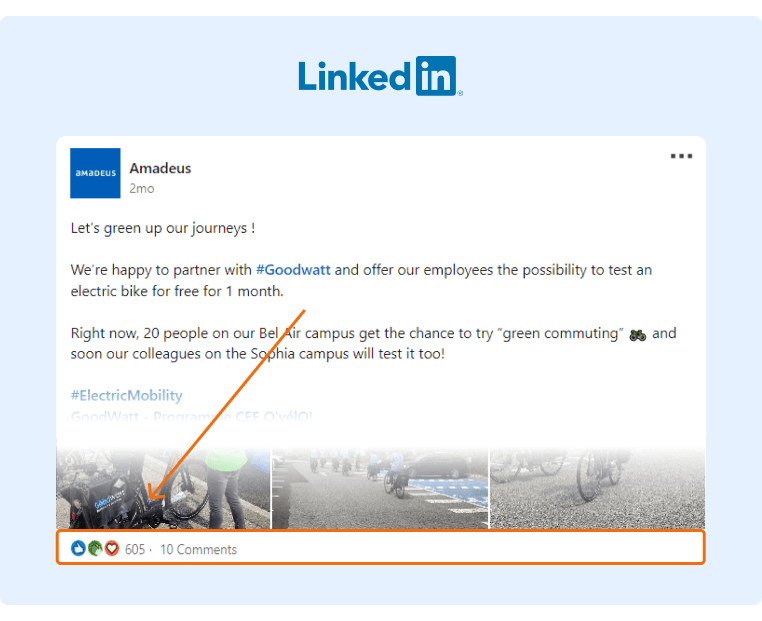 For Women's Appreciation Month, they created a post highlighting a few women in their company who recently received promotions.

Posts that highlight employee wins naturally tend to succeed as their friends also want to support them.

In addition, it's a great recruiting tactic as it openly shows that Sendoso really cares about its employees. 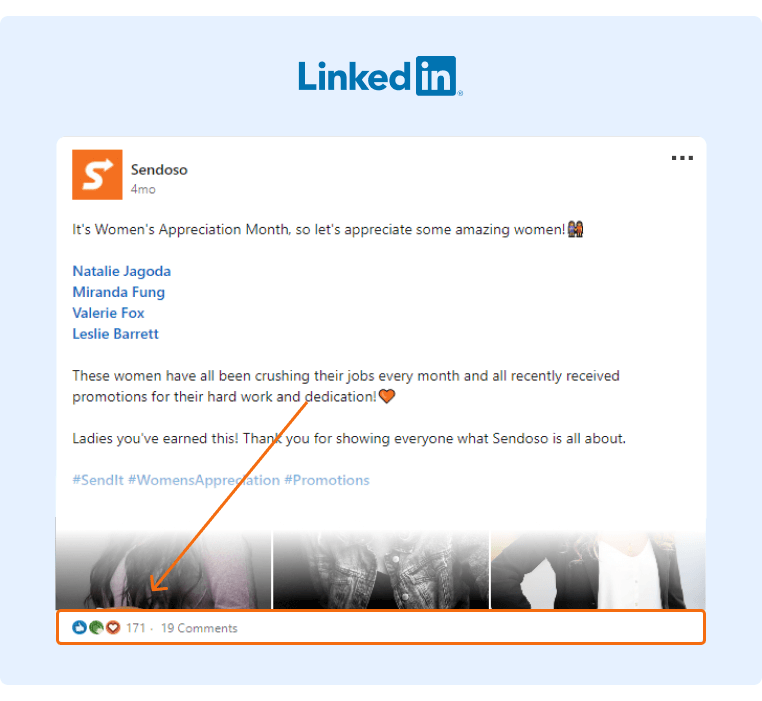 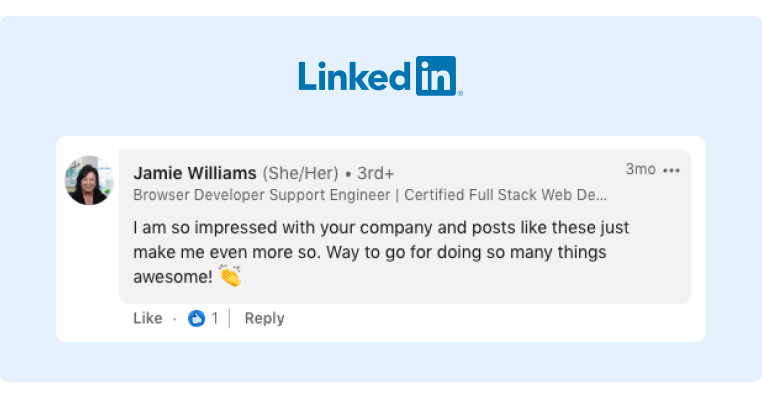 Client success stories naturally tend to perform well, but when they discuss the impact a company had on a person's life, it can turn into a home run. This is exactly what happened when Bright Horizons, an education management solution, posted a heartwarming story about one of their customer's successes.

By making the post about the customer (and including heartwarming images that showed the impact of this achievement), people are naturally inclined to engage. You can also tell that it looks more like a typical post celebrating a friend than a branded promotional post.

They also boosted engagement by using employee advocacy to spread the word. 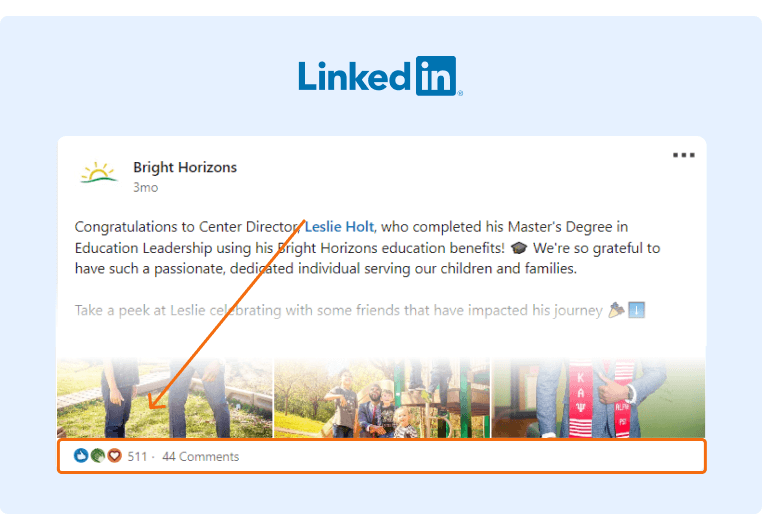 Tata Technologies is a global product engineering and digital services company that recently hired about 80 electric vehicle engineers. To promote the opportunities, they created a LinkedIn post with the details.

This post itself was fairly simple – it includes many hiring-related hashtags and a flier with a basic description of the opportunity.

However, there are a handful of reasons why it probably performed well:

If your company has done any kind of philanthropic work, create a LinkedIn post about it! Philanthropic posts naturally tend to perform well because people want to support positive initiatives.

So when IT consulting company, EXL, posted about its work providing IT needs for underprivileged schools in India, it's no surprise that the post performed very well.

The post itself was relatively simple, though it included several pictures of the school using the new equipment, which added a humanistic element to the post.

They also used employee advocacy to push the post to as many people as possible. 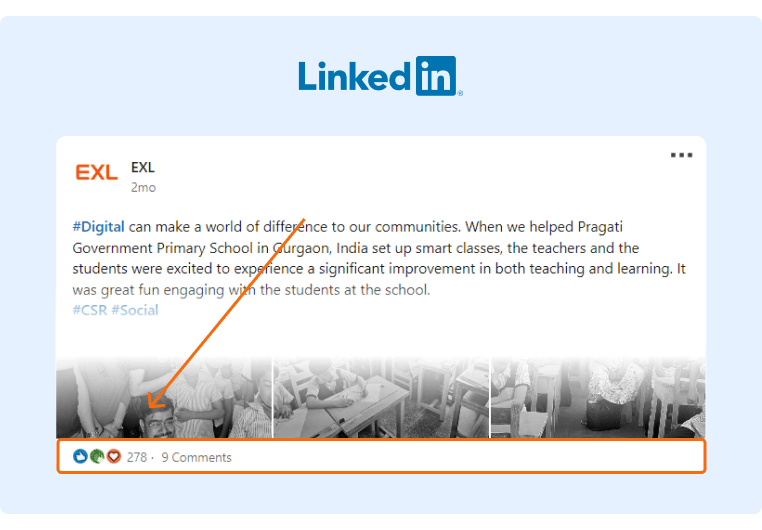 Though before you start crafting new content, I think it's worth noting that all of these posts had one thing in common – they all used employee advocacy to gain traction.

Employee advocacy is a simple way to get more organic traction with minimal additional effort on your part.

However, if you've ever tried to start an employee advocacy campaign, you've probably realized that just asking people to share the brand's content is minimally effective. After all, it's a burden for them to log into their social media platforms, select a post, and then decide what to say (if they comment or share – which are more powerful engagements than likes).

In addition, it's not really feasible for you to track who is engaging and the impact (total reach, estimated earned media value, etc.) of your employee advocacy strategy.

To learn more about GaggleAMP, schedule a demo, or you can go ahead and try it out for free today!